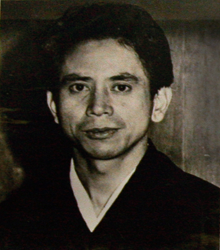 Master Tomosaburo Okano was born in 1922 and was a direct student of Master Gichin Funakoshi and his third son Master Yoshitaka (Gigo) Funakoshi. He was a member of Master Funakoshi''s karate association the Dai Nihon Karate-do Shotokai.

In 1942, Master Okano was given permission to start a karate research club named Kenkokai Karate-bu in his home town of Hachioji-Shi, Tokyo, Japan. The club was started with the help of Master Okano''s friends, Suzuki Shinjo, Kaneko Isamu, and Takagi Yoshitomo. With the guidance and blessing of his teacher he renamed the dojo and called it Kenkojuku Budokan in 1948.

Master Okano''s karate was greatly influenced by both Masters Gichin and Gigo Funakoshi and eventually this branch of Shotokan became known as Kenkojuku Shotokan. As such, he has retained the Shotokai lineage as well as the name Shotokan as the style of karate being taught.

Not only a great Karatedo Sensei, Master Okano was also a dynamic practitioner of laido - The Way of the Japanese Sword.

Master Okano was also a member of the Shihan-Kai (Masters'' Panel) of the Japan Karate-do Federation (JKF), and was declared a Living National Treasure of Japan before he died on July 19, 2003, at the advanced age of 81.

The Dojo is closed for Independence Day

Victory depends on your ability to judge strong points from weak points.