From "China Hand" to "Empty Hand"

A Brief History of Shotokan Karate

At the all-Japan athletic exhibition at Ochanomizu in 1922, a poor provincial schoolteacher from Okinawa demonstrated, by means of scrolls and photographs, a martial art known as Karate. It was Funakoshi Gichin''s second trip to Japan, and this time the seed he helped plant would grow into a Japanese budo (martial way) and spread throughout the world.

Karate was taught in secret in Okinawa up until 1905, when Itosu Sensei, one of Funakoshi''s Sensei''s teachers, introduced it into the school system as a form of physical education.

As a result of the demonstration in Tokyo, Funakoshi Sensei was invited by the founder of Judo, Kano Jigoro, to show kata to senior judoka at the Kodokan. With the help of a young Okinawan, Gima Shinkin, Funakoshi Sensei performed the tekki kata.

This demonstration was a great success, and Funakoshi Sensei was pressed to stay in Japan by Kano and various influential groups. He took up residence in a dormitory for Okinawan students and did odd jobs to help pay for the room and board and the use of one of the halls for his dojo. Enrollment was small at first, but as word spread, he began forming clubs at universities—like Tokyo and Waseda—and for professional groups like the Painters'' Guild, lead by Kosugi Hoan. Hoan illustrated Funakoshi Sensei''s first book and painted the famous Shotokan Tiger. By targeting the upper class, Funakoshi hoped for quicker acceptance of Karate into mainstream Japanese society.

Other Okinawan masters, such as Mabuni Kenwa and Motobu Choki, soon came to Japan to spread te, as Karate was called on Okinawa, throughout Japan. "Kara" means China or "empty" depending on which written characters are used. "Te" means "hand." Calling Karate "China hand" on Okinawa acknowledged the lost links of Chinese influence to the original Okinawan fighting arts. Funakoshi Sensei changed the written word, so that Karate mean "empty hand," and this generated a certain amount of controversy that was political as well as philosophical. But Funakoshi Sensei won out and started evolving the Shuri-te of Okinawa into the Shotokan of Japan.

Funakoshi Sensei was already 50 years old when he moved to Japan, and his sons soon followed. As he changed and modified his teaching methods to suit japanese society, the form of Karate that he learned at his teachers'' homes, in secret and at night, also changed. Stances became longer, kihon (basics) more organized. Slowly forms of kumite were introduced, where previously kata was the sole form of training. 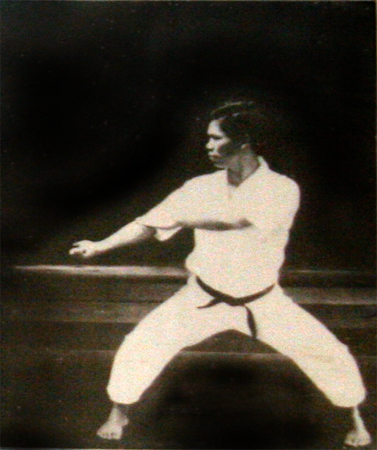 Funakoshi Sensei, now getting older, turned over the day-to-day training to his middle son, Yoshitaka. Not much seems to be known about Yoshitaka Sensei, but he was a dynamic force in the evolution of Shotokan and is credited with introducing the side and round-house kicks and other modern techniques. Pictures of him doing Karate look very much like our modern style, while pictures of his father seem quite different. Yoshitaka Sensei died in his thirties, at the end of World War II.

In post-war Japan, Funakoshi, now in his eighties, still taught some classes. More important, he was recognized as the spiritual leader of all the various Shotokan groups. A new version of his master text, Karate-Do Kyohan, came out shortly after his death in 1957. His "Okinawan Te" had become the "empty hand" art of Japan that would soon spread all over the world.

When you travel about, think that you have opponents waiting to catch you off-guard.